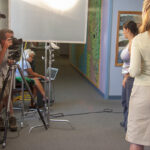 Campaign Candidate on location inside a school

Political campaign and political candidate photography are efforts best undertaken with decorum, skill and as much advance planning as might be reasonably gathered before the shoot.  Keys to success would include one or two previously scouted, outdoors and /or indoors locations with open source lighting in a few different areas.  You would be looking for several natural or subtle man-made features or structures for the backgrounds.  Also necessary would be the friends and volunteers who would patiently observe your requests for wear and even bring extra mundane and muted wardrobe options.  We would like to cast seniors, military, parents, peers and children in believable day-to-day scenarios and please remember to bring a few props too, bicycles, coffee cups, newspapers and the like.

If you have familiarity with either side of the camera on photo shoots then great. If not be prepared to be asked, or to hear – repeatedly – the request that the subjects stand much closer together than in normal daily conversational discourse.  Next will be the direction to pantomime the conversation with gestures.  A good pro with some experience would understand that for film/video talking can be a good thing.  However in still photography, talking naturally or chatting is not desired at all.  Speaking for myself I can remark that in 20 years of shooting for political campaigns and on commercial assignments we have seldom- if ever- obtained good results by allowing conversations to occur while we are shooting the frames. Before or during the set-up and after – that’s no problem at all.

So far we have covered locations, wardrobe, additional support talent, and camera direction.  Find locations like parks and community centers and open spaces which offer you open source lighting with good rich textured and subdued backgrounds.  Ask you candidate to bring several wardrobes options previously reviewed by the someone on the team.  For the volunteers it is the same coach on wardrobe and props.  Direction in front of the camera is very important, stand much closer than in day-to-day life, pantomime as if you were mildly enthusiastic about an important topic or subject, and take the direction of the campaign strategist and the photographer.  That sometimes includes looking or facing slightly towards the camera rather than facing directly at the candidate.  The basic shot list is going to include the candidate solo, with one or two variations, the candidate with their spouse or significant other, the candidate with their family, natural or extended, seniors, military & veterans, children and friends and peers.  Make a schedule and list based on your location, plan and prepare in advance, hire helpers or bring volunteers to assist you with your equipment and be sure to focus, back-up your files and laugh in equal proportions.